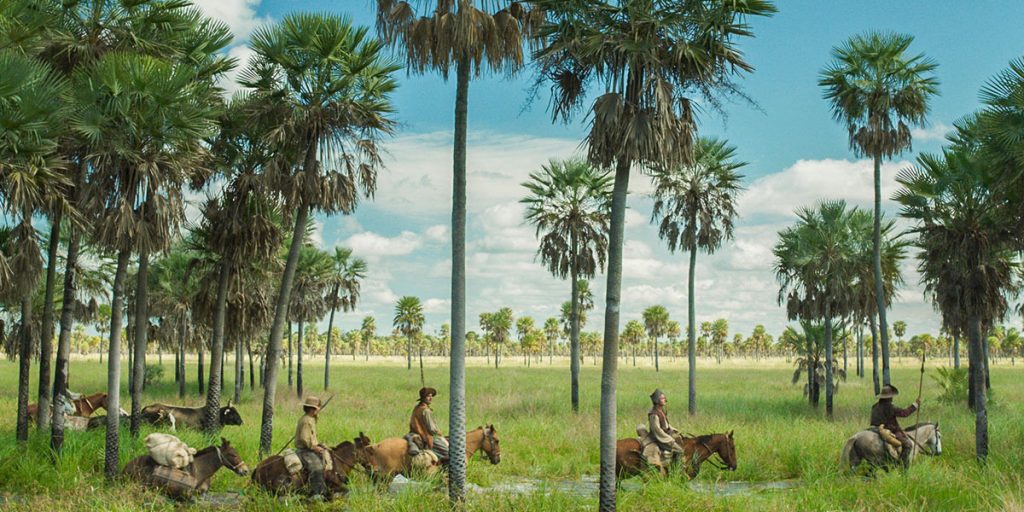 Waiting and hoping: In Spanish, the native tongue of Argentinian director Lucrecia Martel, and the language of her highly anticipated, frequently delayed new film, the word is the same. It’s not just a trick of linguistics, in “Zama,” to wait and to hope are interchangeable concepts, equally futile and equally agonizing. Both give rise to the same torpid kind of madness. To make a film about expectations repeatedly disappointed and gratification constantly postponed is a challenge that Martel, never known for compromise, takes on with an absolute and unswerving sureness. But her certainty is also slightly terrifying, concealing this enigmatic film’s meaning within a rock-dense, borderline impregnable shell of stunning, disturbing imagery, opaque dissociated dialogue and a pessimistic view of human nature that runs so deep it’s a soul sickness, a spiritual cholera. “Zama” is a difficult film. But if you find a way to crack open its forbidding, austere exterior, there is treasure to be found, or at least something that sparkles, beautiful and cruel, like the spiky insides of a geode.

It’s been almost ten years (a long time to wait/hope) since Martel’s last film, the poised, angular, brilliant “The Headless Woman,” which followed two similarly excellent, minutely calibrated features, “The Holy Girl” and “La Cienaga.” “Zama” is a departure: where her reputation was built on razor-sharp vivisections of the racism, sexism, religious hypocrisy and classism that her bitter, uncanny stories suggest undermine contemporary bourgeois Argentine society the way rot undermines a tooth, here her characters wear period garb and her narrative is taken from the pages of a 1956 book by Antonio Di Benedetto.

Yet all that scathing commentary is still there, it’s just more oblique and elliptical than before (maybe rather than an outlier, this is the most concentrated dose of Martel’s unique sensibility we’ve yet witnessed). Diego de Zama (Daniel Gimenez Cacho, whose saturnine countenance looks like it should be carved in stone or stamped on a penny) is a petty official for the faraway Spanish Crown. Long separated from his family (long enough to have fathered a squawking little boy by one of the native women), he is desperate for a transfer away from the far-flung corner of the South American colonies where he works for the local magistrate, and swallows a series of humiliations on the promise that his superior will at last write the petition letter to the King.

But Zama is no hapless, harmless antihero. Our introduction to him is as he spies on a group of local women and Luciana (Almodovar regular Lola Dueñas) the wife of an important local nobleman, as they bathe in rich river mud and chatter. Caught out as a peeping Tom, there’s a whimsical moment when one of the native women chases him up the hill to find out who the “voyeur” is, which ends abruptly when he slaps her stingingly across the face. Zama may be cowed into a kind of paralysed submission by his social betters but there is nothing to stop him visiting ugly acts of violence or neglect on those beneath him on the social ladder. Here the powerful colonialist elite wear their authority as poorly as their ill-fitting and impractical powdered wigs.

Back in his makeshift office, a young black man is being held captive, arms tightly bound with leather restraints that bite into the flesh of his back. About to be released, the man instead flings himself headfirst against a wall, then proceeds to relate a strange story about a fish who is disliked by the water. This abrupt turn into quasi-surreal territory is only the first of many such: “Zama” is confounding in its fever logic, and its allusive, sidelong connections from scene to scene and character to character.

There’s a visiting merchant, known as “The Oriental” who travels along the river bringing with him fine brandy and the plague. There’s a local bogeyman called Vicuña Porto who may or may not have been caught and killed, and whose ears the magistrate wears on a string around his neck, having won them in a game of chance. There is a scribe with literary ambitions, the innkeepers’ trio of comely daughters and there are the natives who are forever engaged in arcane rituals and inexplicable exchanges of their own while Zama’s lassitude and frustration mounts and the months tick into years.

Unlike ostensibly similar slow-cinema films, such as “Jauja” by her countryman Lisandro Alonso, Martel’s leisurely pacing does not connote a paucity of action or intrigue. If anything, “Zama”‘s sluggish rhythms belie a surfeit of incident: Every scene is steamy with background activity, the air thick with hidden motivations and unspoken crosscurrents. It is heady and tactile, with “Tabu” DP Rui Poças creating exquisitely precise frames, and sound designer Guido Berenblum then coloring in a whole universe of chirruping crickets and stagnant waters outside them. Every close up is a portrait and every wide a tableau: at one point Zama is taken to task by a sour-tempered superior and we can actually hear the old man blink. The formal control is remarkable, but sometimes almost stultifying, as though Martel had spent every moment of this intervening decade plotting how to pack each scene more densely, to the point it feels like “Zama” could maybe stop a bullet. It will certainly deter the less persistent viewer.

There is some Quixote here, not just because of the language and time frame, but also because of the essential futility of so much of Zama’s endeavor. But the real literary touchpoints are more modern: Zama waits for deliverance that never comes like a Beckett character and goes insane through upriver isolation like a mid-ranking Colonel Kurtz. And Kafka would get a dry chuckle out of the irony that is going on a manhunt for a man you know is a member of the hunting party, or seeing the reward you hoped to gain meted out to your enemy as a punishment. But then, the challenging, patience-testing, yet undeniably visionary “Zama” is neither of the past nor of the present, but belongs to some half-lit eternity instead, where people have been consigned to atone for sins they only foggily remember committing, and have nothing to do but wait out the Purgatory of prolonged hope. [B+]