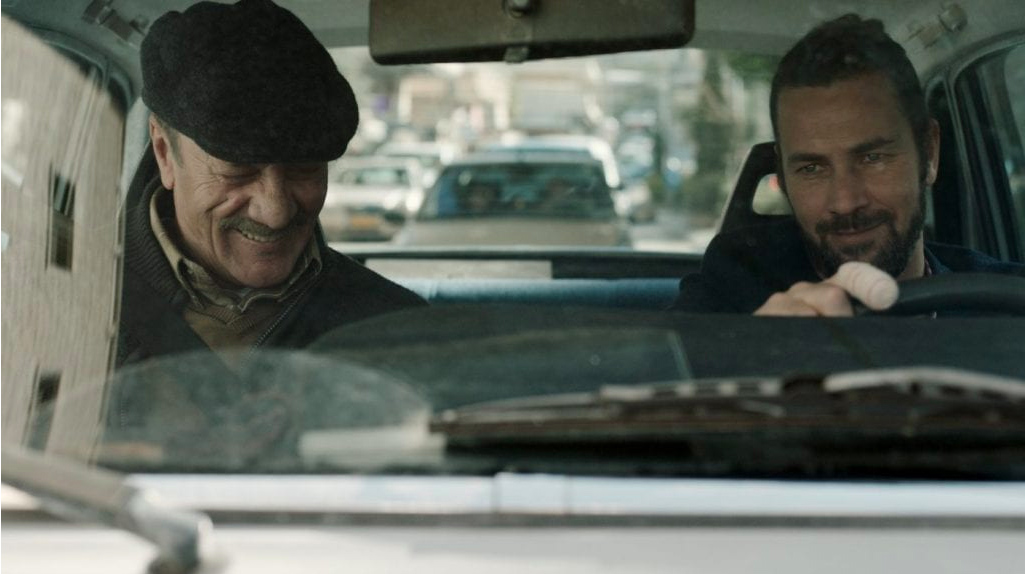 SFS: We find the traditional custom of physically sending wedding invitations to relatives and friends fascinating. Is this something unique to Palestinian culture and what is its significance?

AJ: In Palestine, when someone gets married, the men of the family, usually the father and sons, are expected to personally deliver the wedding invitations to each invitee in person. Since screening Wajib internationally, I have learned that it’s not only a Palestinian tradition but one that was practiced all over the Mediterranean, and beyond.  But the reality is that today many of us do not carry out this tradition anymore, however I found that in the North of Palestine, where Wajib is set, it is still very much adhered to.

My own interpretation is that the insistence on this tradition, as well as others, is a way for Palestinians who were occupied 70 years ago and where the majority of us became refugees, is a form of resistance, of refusing to disappear. You have a town like Nazareth, the largest Palestinian town in historic Palestine, where the remaining residents were forced to carry Israeli IDs – and they hold on so strongly to this tradition of hand delivering wedding invitations no matter what. For me it’s about holding onto one’s identity and all the contradictions that come with it.

SFS: What inspired you to cast real-life father/son duo Mohammad Bakri and Saleh Bakri in “Wajib”? Did the Bakris create any special chemistry onscreen or on the set that you did not anticipate?

AJ: When I wrote Wajib, I had Saleh Bakri in mind for Shadi. I’ve worked with Saleh and I know how much he is capable of.  It was Mohammad that I had to think a lot about for the role of Abu Shadi. I knew he would give so much to the character – and that he and Saleh working together would give even more – because of course a lot of the issues and tensions in the film are very personal. I knew that if it worked, it would be explosive , and would give so much depth and pain to their relationship. But I was afraid because if it didn’t work, it would be a disaster. I was very aware how difficult it would be for them as actors to work so closely together since they are father and son. They might have block-ups, even subconsciously, they could have been unable to push each other the way they do so “publicly”, to air their dirty laundry – it’s extremely difficult to work with your own family.

Finally we spoke about these challenges very openly together and shared our fears and concerns. I remember Mohammad saying this would be the greatest challenge and in fact the project of his life. For those who know Mohammed, you also know how far away he is from being “Abu Shadi” – in terms of thought, in terms of looks, and energy. Our rehearsals were very intense. Mohammad worked very hard for months on this.  In the end, I could not be more happy with our work together and with the two of them. They gave their everything to the film and took it to a new place.

SFS: We have been picturing the image of Shadi and Amal’s absent mother. She is never present in the film yet is omnipresent at the same time. Tell us what inspired you to create a character like her in “Wajib”?

AJ: Omnipresent for sure. She is a presence between the two main characters in the car and in their lives. The idea was to create a character who is never seen however has deeply affected, and still affects, the main characters. The fact that she also left her husband and her children to run away with a lover was something key to the story. It’s certainly not unusual but definitely something “less acceptable” in traditional societies. But much of the tension for Abu Shadi is that he feels deep down that he was deeply humiliated in front of his community – it’s something that everyone knows, and through the years he has found his ways to deal with it, to ignore it, and to put up a public face.

As Abu Shadi and his son ride around Nazareth, we move between the public “act” of Abu Shadi and the private man when he’s alone with his son. He also knows that deep down Shadi respects and admires his mother for doing what she did, which is somehow the ultimate humiliation for him because more than anything it hurt him, it broke him. I also wanted to create a story which through one person’s absence, another one becomes two. Abu Shadi has become both mother and father for his children. It is something which Amal, the daughter, knows. But it is part of what Shadi finally understands only at the end of the film.

SFS: You have worked with actor Saleh Bakri on all three of your features thus far. What characteristics does Mr. Bakri have that enabled him to take on these multi-faceted characters in your films?

AJ: When I cast Saleh in Salt of this Sea, he had not been on screen yet. So in many ways, we began our careers together.  I found in him a very talented actor, artistic collaborator, and also a great human. It is why I continue to work with him. Saleh continues to surprise me, and to challenge me. He is also someone who looks at the world, approaches life, and whose politics are very much in line with my own. He is an extremely dedicated worker and his attention and love for his craft is something I respect very much. Aside from his talent, he is an ethical person and has dedicated himself to his work and to his people. We also work very well together. We are birds of a feather.

SFS: How has your own experience living abroad contribute to creating the contrast between the distorted blinkered view of life that Shadi sees versus the ‘reality’ that Abu lives in everyday?

AJ: I grew up in the Arab world, I studied in the US, lived in Europe, and came back to live in Palestine. I am a nomad, I’ve lived in countless cities and have relationships with many places —  and yet Palestine is the only constant place I’ve ever known. The only place I have always returned to and have known all my life. So perhaps this makes me a little Abu Shadi and a little Shadi. I understand Shadi’s anger, his rejection of injustice. I understand the freedom he has found in being on his own, in living in a country where you are just like everyone else and not subservient. But like Abu Shadi, I choose to live in my country, in Palestine.

Which one of them has a distorted vision and which one has a more realistic one is arguable. But what I see are two broken men, both who carry a lot of pain and anger – but of course they show it in very different ways. In the end, Wajib is about two men who have lost their family and are somehow trying to find each other again. Two men who have made different decisions in their lives and just need a bit of respect from the other. At the end of the film, I don’t want to say who is right and who is wrong – I just want to be honest about their pain, and their reality.

SFS: Being an activist for women and young people in the film industry, is there any advice you would give to aspiring filmmakers in Singapore?

AJ: I don’t know the details or the difficulties of the film industry in Singapore, but I do know that we have not heard or seen enough stories from Singapore and that there are great talents here. And many, many stories to be told. My advice would only be to say that we must all learn to trust ourselves and trust our instincts, and to fight for that. As a young filmmaker, you must know that no one is really going to help you and you have to make it happen yourself, by any means. Whatever resources you can gather, just make your film, make it happen.