Home News Upside Down receives a grant from Crossroads

Upside Down receives a grant from Crossroads 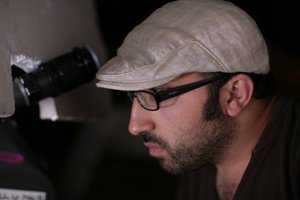 Upside Down by Ahmad Ghossein received a grand from Crossroads, AFAC's (the Arab Fund for Arts and Culture) special fund for emerging directors from the Arab world working on films related to "possibility" and "change".

Projects selected for Crossroads will receive, in addition to financial support, professional support from a group of experts who will act as consultants/advisors through the various stages of the project.

In his debut feature-length narrative Upside Down (Lebanon), Ahmad Ghossein is concerned with the sectarian and political crossroads at which Lebanese diverge.

Five people try to escape the bombing in a southern Lebanese village during the last days of the July War. They decide to hide in the basement of an undamaged house. Soon, seven Israeli soldiers enter the first floor. Trapped by their own fears, they experience an out-of-control situation during the next three days.